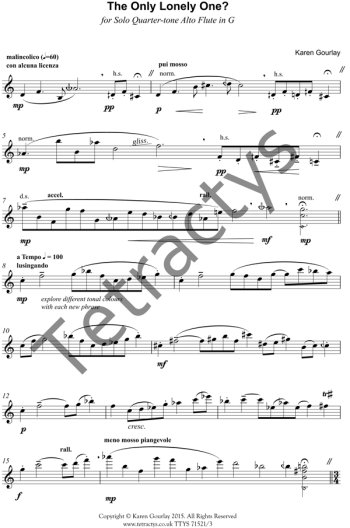 Karen Gourlay -The Only Lonely One?

The pre-compositional idea for this piece arose from the fact that the Kingma system alto flute, offering a complete range of quarter-tones, is a rare instrument. The Only Lonely One? incorporates different ways of writing multiple lines for the solo flute, both implied (e.g. through register, timbral, and dynamic contrast) and actual (e.g. multiphonics, and singing and playing). The lowest pitches of four artificial multiphonics were used to generate melodic lines. From its beginnings as a solo melancholic lament (am I the only one?) the music moves through different characters. The performer can explore different tonal colours in the coaxing lusingando, before the frenetic Allegro agitato. The opening material is transformed over three octaves, featuring increasing use of multiphonics, as contrasts of register, articulation and timbre build to a frenzied climax. The ensuing reflective passage recalls the opening, before leading to a joyful conclusion. Is the only lonely one alone? The music ends with a brief mysterious phrase, questioning the function of the preceding giojoso. Although it recalls the loneliness of the opening lament, there are two melodic lines. As a consequence there is more than one possible answer to the question posed by the title, The Only Lonely One?.

The Only Lonely One? was premiered by Carla Rees in the final of the rarescale Composition Competition at the Royal College of Music in London on 8 July 2004.