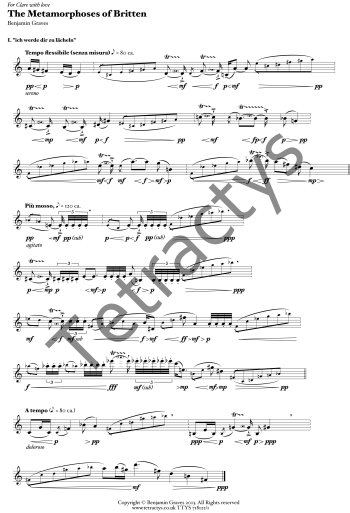 Benjamin Graves - The Metamorphoses of Britten

The Metamorphoses of Britten (2013) – Benjamin Graves

It is a well know fact that Benjamin Britten, after completing his very British studies - firstly as a teenager with Frank Bridge and then as a student at the Royal College of Music with John Ireland - was set to attend postgraduate studies with Alban Berg in Vienna, but was dissuaded by his parents as well as the RCM staff. This brief part of Britten’s history inspired the composition of The Metamorphoses of Britten.

Destruction of innocence by a higher power is a narrative unavoidable in conjunction with Britten’s music and it is starkly considered in his all male opera Billy Budd. The Six Metamorphoses was written as a companion piece to this opera and explores the same theme. It stands to reason then that these two pieces form the cornerstones of my composition. In my piece I drew a parallel between the theme of lost innocence and Britten’s thought process when considering studying with Berg. He could have had his romantic innocence destroyed by the higher power of Berg’s serialist thinking and so eventually decides against it, or conversely his innocent decision to study with Berg was destroyed by the higher power of his parents and teachers.

In movement one I morph the opening of Six Metamorphoses into Salome’s motif as it appears when she persuades Narraboth to bring her Jochanaan. This represents decisions being made to succumb to manipulation. Movement two transforms Salome’s motif into music from The Rake’s Progress, specifically when Anne Trulove bids farewell to Tom Rakewell as he sets off for London with Nick Shadow. Here the transformation begins to take place. This becomes the note B in movement three, the single note that rings across the orchestra when Wozzeck murders Marie in Berg’s opera, representing the final product of the transformation. Finally movement four sees the B become the motif played as Billy Budd forgives Captain Vere for condemning him. Here Britten has returned to his original form, all the wiser for the experience. The fifth movement sees all five quotes put together in a single melody in a summing up of the work.


The Metamorphoses of Britten was premiered by Clare Crinson in the Lindisfarne Centre, St Aidan's College, Durham University on the 28th April 2013