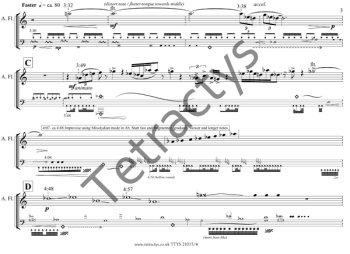 
The title Ut stems from the syllable formerly used in solfège to represent the key note of the Ionian mode (the major scale), now replaced by ‘do’. The piece Ut evolves around the key note of the E flat major scale, also moving on to other medieval modes. Ut is written as a solo piece for alto flute, yet it forms a duet with a pre-recorded and processed tuba part. However, in spite of the fixed nature of the tape, the piece will never sound the same twice, as there are several improvised sections where the performer has to choose how to respond to the tape part.