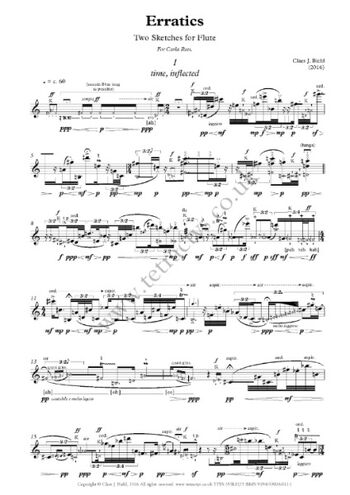 
With Erratics for solo flute I aimed to explore different aspects regarding the perception of time. The title, which refers to erratic blocks, is meant to symbolize timelessness and serves as an abstract temporal reference point around which all musical processes revolve.

The first movement (time, inflected) predominantly focuses on a linear concept of time and features dense successions of frenetic gestures which are occasionally interrupted by haunting distorted melodic fragments. The second movement (nightfall) picks up where the first one ended but quickly adopts a more static perspective: here, the forward moving directional characteristic is given up in favor of self-contained multidimensional temporal objects separated from each other by long rests.

The apparent contrast between the two movements (fast/directional vs. slow/static) is attenuated by the fact that both share the same musical material. It gradually becomes clear that the second piece basically expresses the “same” things as the first one, however, in a different way and from a different angle, especially with regards to the perception of time. Despite this interrelatedness, it is also possible to perform each movement separately.

The piece was written for and premiered by Carla Rees.