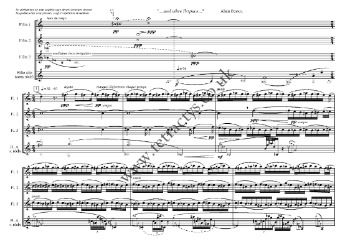 
Seul vibre l’espace is a highly pictorial universe of waves, shadows, cloths, scrolls and surfaces which is always animated, undulating, vibrating, sharing a common evolution in a process going towards an endpoint in a predetermined way, or sometimes more unexpectedly.

This plural voice is conceived as a choir “with equal voices” and comes in various thicknesses, registers, spaces (contracted or exploded), animated by polyrhythms and sliding harmonies. For me, it is like a small study of movement which explores the agility of the flutes within diverse soundworlds.

Four evolutions of process take place:
1. Almost a wave (in the physical sense) which amplifies and then reaches its end while disappearing. The alto flute, the “free” instrument, envelopes the framework with its soft ornaments and supple rhythm…then it is its turn to be “engulfed”…
2. A second undulating landscape from which the more melodic alto flute progressively appears.
3. A third layer, characterized by a greater fixedness, on which the alto flute undulates.
4. The fourth strand evolves towards a point of balance; twilight, décor that freezes; the very fine line of the alto flute cuts the space….


Notes for performers:
Figure 1: The regular pulsations of the 3 flutes oppose the virtuoso writing for the alto flute. This must emerge cleanly from the framework with a sound that should be in the background (always in a pp dynamic) and well blended.
Figure 2: The alto flute gradually gains rhythmic independence from the ostinatos and becomes the soloistic voice, highlighted by its rhythmic flexibility and this must be played freely. Flute 3 joins it in heterophony (6 bars before figure 3)
Figure 3: The 3 flutes must produce an acoustically resonant effect in respect to the principal line of the alto flute. Therefore, this should be played with no vibrato and at a very soft dynamic. The end of the section is a transition towards the fourth part: agitation then a new effect of a slowing down polyrhythm.
Figure 5: In this section, the use of the Kingma System would be an advantage in the agility and intonation of the infratonal curve of the alto flute