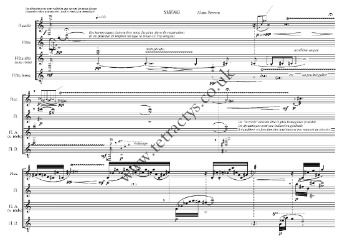 
Sheng refers to the Chinese mouth organ.
The harmonic framework of Sheng does not imitate or stylize the tome of the mouth organ but more its chord-producing ability (a cycle of fifths contracted in the octave for the mouth organ of the Japanes Gagaku, for example): a mixture of fourths and fifths most of the time (the 3rd and 4th partials), which generate a limited number of chords (in principal, hexachords), but are sufficiently numerous to create a rich language and harmonic system.

The three “low” flutes represent the mouth organ; the piccolo is an ornamental, free voix, of the “bird” type. It is the elusive living “character”, which evolves in the “décor”, the frame of harmonies generated by the flutes.

The notation of the ligatures in the score is always relative: demisemiquavers are an indication of fast speed and do not have to be strictly measured within the indicated tempo. The semiquavers are a lesser speed, etc. On the other hand, the durations written in a tempo must be observed. The piccolo phrases are therefore the benchmark on which, more often than not, the other flutes must match. For this, rests in brackets are indicated for placement which are therefore not true rests but (approximate) rhythmic indications.

The chords should be as homogenous as possible. It is advisable to rehearse with the three flutes independently of the piccolo to achieve a balance of tone and to work on intonation. The dynamics are also relative. In the held harmonics – which are played until the next breath mark or rest – it is of course possible to breathe as needed, especially in very long held notes.