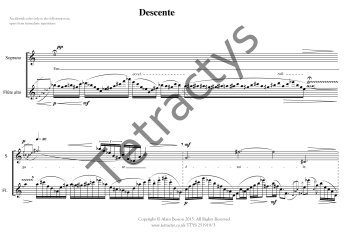 
Limpid poetry, apparent simplicity and contained expressivity – in combinations of words, images and sounds in a free and discontinuous form, the language of Pierre Reverdy already conceals deeply musical material.

Descente plays on superimposed speeds and times, in the manner of a medieval motet with free polyphony (voice, motetus: flute, duplum): syllabic diction of the text; each line suggests an emotion/image translated into colour/harmony

Les mots qu’on échange This piece is conceived around three characters evoked in the poem, and in particular in the central stanza: “En partant nous étions trois/Mon ombre et moi/Et toi derrière”. The voice is written in parlando style, comme un récitant. Everything rests on the monodic writing of the flute: evolution, in the background of a colour “halo”, on spectral scales, between inharmonic and harmonic, in relation to the the lightness/darkness of the landscapes of the poem. The piece was developed thanks to the possibilities of the quartertone Kingma System.

Un seul moment In contrast with Descente, Un seul moment presents particularly melismatic vocal writing. Each word receives a specific treatment and the music seeks to create “remote” sound connections, in relation to the phonetic structure of the poem. The flute, in turn, accompanies the vocal games by enveloping it in harmonies, or indeed by developing independently as an illustration and decoration. Here, too, are the superimposed speeds and times.

Performance notes:
The absence of barlines in the writing always indicates a certain freedom and rhythmic flexibility. The speed is relative to standard writing. For example, the semiquavers are in fact often a little faster. The second piece is much facilitated by the Kingma system which allows intervallic relationships with precise quartertones. The dynamics of the voice are intentionally not indicated (without exception). The voice, in parlando style, should adapt to the dynamics of the flute. The intelligibility of the text is paramount. The speed of diction should be adapted to allow clear comprehension. Here too the groups of notes without ligatures are indications of relative tempo: semiquavers, rather quick and fluid, quavers medium tempo etc.