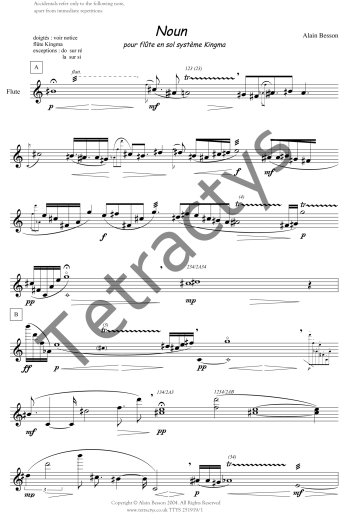 
The title Noun refers to the Hebrew letter N, whose numeric symbol is 50; Noun is simply the 50th work in my catalogue, and is dedicated to Françoise Ducos. Noun is inspired by the magnificent instrument designed by the Dutch maker Eva Kingma. This flute offers new possibilities thanks to its quartertone key system. The monodic writing is based on an evolution of non-conventional scales which invoke a particular expressivity: for example the division of major and minor thirds into three quarters and a quarter of a tone. The resulting melody possesses therefore the expressive qualities of “big” distorted intervals with respect to their tempered value and not only the infra-chromatic possibilities (small quarter tone intervals). It also exploits the different colours of each register which are typical of the alto flute, and the virtuoso possibilities of the Kingma flute.