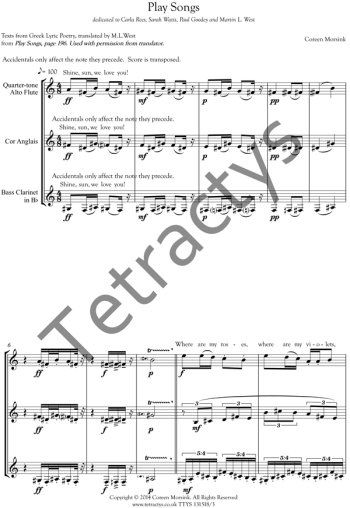 Coreen Morsink (b. 1971) - Play Songs (2016)
Based on translations of Ancient Greek Children's songs and games by Dr ML West.


Inspiration for writing Play Songs came after reading Dr ML West's translations of Ancient Greek songs and games for children. When Carla Rees suggested that I write a trio for Kingma System alto flute, cor anglais and bass clarinet I wasn't sure how to start. One day in Athens Greece, after teaching a music class to 6 year olds with so-mi-la patterns, it struck me that the musical taunt that children still sing today resembles the tetrachordal pitch groups from ancient Greece. I started to wonder what the melodies that children sung 2,500 years ago sounded like and combined these patterns and West’s translations, coming up with the tunes for the songs such as, "Shine, sun, we love you!" (a chant that children sung, clapping their hands when a cloud "passed over the sun") and "Torty-Tortoise", a circle jumping game. The piece is like a musical joke; a satire of my more serious work on ancient Greek music and also referring to the humour of philosophers and writers in ancient Greece.

Another aspect of this work is 'playing' the words of the text. As an accompanist I learnt that I need to play the text of the song along with the singer, thus giving the meaning of the words through the notes. In Play Songs the instrumentalist plays the text just as a singer would interpret the lyrics of a song.
This piece is dedicated to the rarescale trio (Carla Rees, Sarah Watts and Paul Goodey) and to the memory of the late Dr ML West who kindly and humorously aided me in my understanding of ancient Greek music and gave me permission to use his translations in my music scores and thesis.
Text quotations are from Play Songs translated by ML West, Greek Lyric Poetry, Oxford University Press, 1993. P196