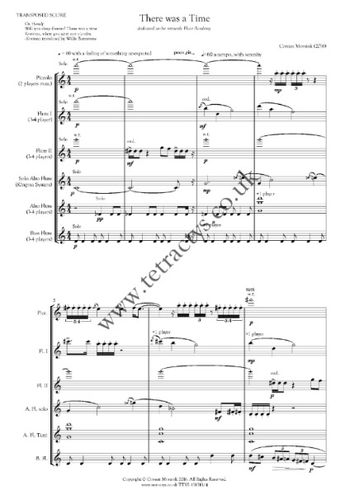 Coreen Morsink - There was a Time


There was a Time is a piece which quotes bird song from Canada, the United States and Greece, such as the Fox Sparrow and the Hoopoe. The title comes from the ancient Greek poetess Korinna, who wrote “Will you sleep forever? Korinna, there was a time when you were not a loafer” (translation by Willis Barnstone and used with permission). The piece uses a combination of ancient Greek musical techniques and quotes from bird song, and was written for, and is dedicated to, the rarescale Flute Academy.

Performance notes:
The bird songs were transcribed at A=432, as this is their natural frequency. The piece may be performed at this pitch if desired.

There was a Time was originally written with the intent of one player per part, but over time the current ensemble version evolved. The present edition is for a larger group with solo parts, but the work can also be played with just one player per part.