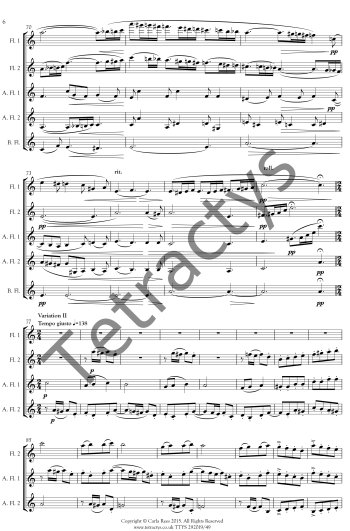 
Amy Marcy Cheney Beach (labeled in her scores as Mrs HHA Beach – she was married to Henry Harris Aubrey Beach, 24 years her senior, who restricted her piano performances but encouraged her composition work) lived from 1867-1944. She was musically active from her early childhood, and was something of a prodigy. She had strong musical ideas and was mostly self taught as a composer, although she studied the piano, and had a year of training in counterpoint and harmony. Her career began as a pianist but her composition gained increasing attention and after an 1892 performance of her Mass she became one of America’s leading composers. After her husband died in 1910 she travelled to Europe where she performed her own compositions. She was a pioneering female composer, proving that it was both possible and acceptable for women to work successfully in this field, and was for a while the leader of the Society of American Female Composers.

There is much to enjoy about the Theme and Variations. Firstly, there are the lyrical melodic lines, which are both memorable and well suited to the flute. The variations have their own individual characters, from the fast, spritely energetic ones to the languid slow ones, and include a slow and poignant waltz. The instrumental writing is interesting; the melodic material is shared between the parts and the parts are often quite closely scored, with the viola occasionally taking over the bass line while the cello has melodies above. Beach clearly had an interesting imagination for the use of timbre, and she was not afraid to use combinations of instruments in interesting or unusual ways. For me, the highlight of her writing is the harmony. She writes in an essentially tonal language, but goes through a broad range of keys and uses a lot of colouristic dissonance and chromaticism in the variations.

For me, arranging is a wonderful way of getting to know a composer’s work from the inside. By handling each of the instrumental parts individually, and rebuilding the piece in layers for flutes, I discover all sorts of little details about the music that are harder to notice when listening ‘from the outside’. The process of arranging is very much about trying to retain as much of the original qualities of the piece but in a way that works convincingly for the new instruments, as if it was intended for them in the first place. A big challenge with flutes is the limited range; the bass flute of this ensemble is an octave higher than the lowest notes of the cello, so that means often the acoustic space is reduced when moving string quartet music to flutes. In this arrangement, I wanted to keep the solo flute part as close to the original as possible, so any octave transpositions in the ensemble had to happen sensitively so as not to change the overall line of the music or to swamp the flute part. Handling the double stopping is also a challenge; if one of the parts had a rest I sometimes used that part to play the extra notes (as happens sometimes in the solo flute part). Otherwise, I had to choose which note I could miss out of the harmony, which was sometimes a difficult choice to make, since there is very little doubling between parts.

This arrangement was commissioned by the Canadian flute quintet, Charm of Finches, who gave the first performance at Ottawa Chamberfest on 24 July 2016.