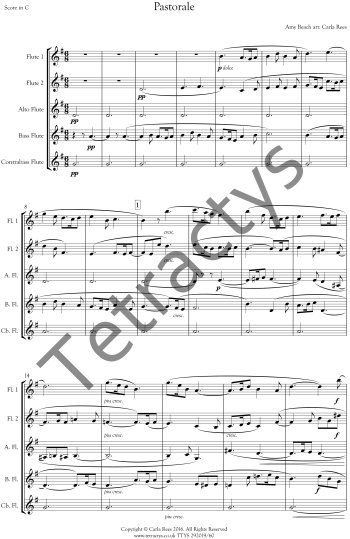 
Amy Marcy Cheney Beach (labeled in her scores as Mrs HHA Beach – she was married to Henry Harris Aubrey Beach, 24 years her senior, who restricted her piano performances but encouraged her composition work) lived from 1867-1944. She was musically active from her early childhood, and was something of a prodigy. She had strong musical ideas and was mostly self taught as a composer, although she studied the piano, and had a year of training in counterpoint and harmony. Her career began as a pianist but her composition gained increasing attention and after an 1892 performance of her Mass she became one of America’s leading composers. After her husband died in 1910 she travelled to Europe where she performed her own compositions. She was a pioneering female composer, proving that it was both possible and acceptable for women to work successfully in this field, and was for a while the leader of the Society of American Female Composers.

She was fond of nature and often chose to work near parks and woodland. This landscape is reflected in the Pastorale, originally composed for wind quintet in 1941 at the MacDowell Colony in Peterborough, New Hampshire. The piece is developed from earlier sketches, including a 1921 version in D for solo cello with flute and piano. A second version for cello and organ was published in a collection of five pieces for cello and piano. The music for the quintet version is written in a relatively conservative style, and Beach reworks the original sketches in a contrapuntal texture. The piece is written in the form of a sicilienne in ABA form and is Beach’s only work for woodwind quintet.

This version for flute ensemble maintains an even balance between the parts and is well suited to the sonority of the lower flutes in particular.