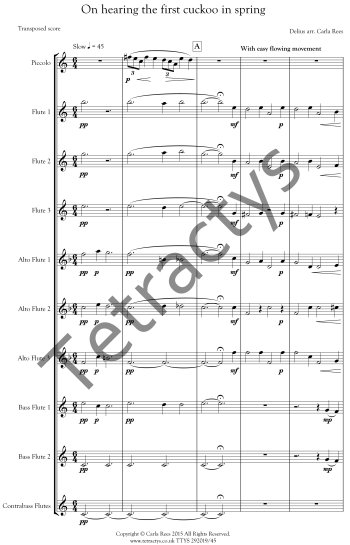 Delius - On Hearing the First Cuckoo in Spring


Delius was born in Bradford in 1862, to German parents (his birth name was Fritz Theodor Albert Delius). He maintained an international life, moving first to Florida at the age of 22, and then returning to Europe to study under Reinecke at the Leipzig Conservatory in 1886. Two years later he moved to Paris, and finally settled in a village in Seine et Marne for his last 37 years.

This orchestral tone poem was written in 1912, when Delius was already living in France. One can sense the numerous influences on his music; his approach to the late Romantic style is a unique fusion of the English pastoral style with rich European harmony.

On Hearing the First Cuckoo in Spring was written alongside Summer Night on the River, and the two pieces were published together as Two Pieces for Small Orchestra. In this arrangement for flute ensemble, made at the request of Atarah Ben Tovim, the cuckoo can be heard in the piccolo, which sings over the rich sound of low flutes.