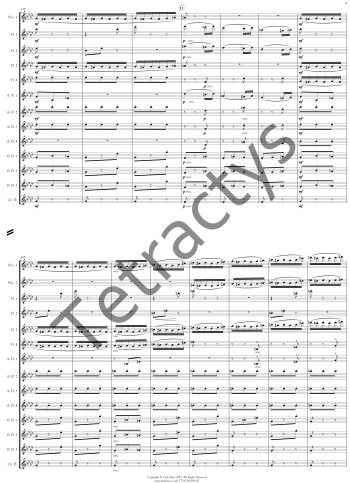 
Perhaps best known as a result of its inclusion in Disney’s Fantasia, this orchestral tone poem was written in 1897, and continues, to be the only of Dukas’s works to be frequently performed.

Dukas received his musical formation as a student at the Paris Conservatoire, and The Sorcerer’s Apprentice bears all the hallmarks of an expert orchestrator and technically skilled composer. He became a professor at the Conservatoire from 1910-12 (orchestration) and from 1927-35 (composition), where his students included Messiaen and Rodrigo, and he was also active as a music critic and writer. However, he was highly self-critical and allowed only a handful of works to be published.

The Sorcerer’s Apprentice is based on a ballad by Goethe (Die Zauberlehrling), in which the student brings a broomstick to life and sets it to work. However, there are several mishaps and adventures along the way.

This arrangement for flute ensemble is dedicated to rarescale Flute Academy, who gave the first performance at St Catherine’s British School in Athens in February 2017.