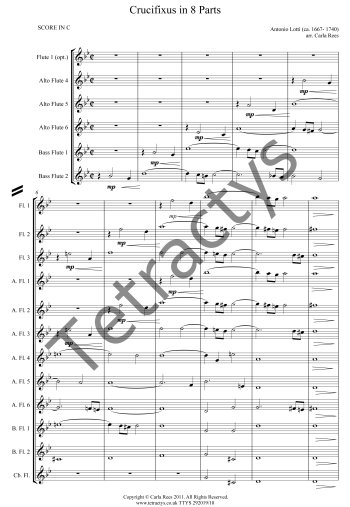 
The Crucifixus in 8 parts is perhaps Lotti’s best known work, and comes from the Credo in F for choir and orchestra (a setting of a movement from a Mass), thought to have been written in Venice before Lotti lived in Dresden between 1717 and 1719. The Crucifixus section of the original Credo is heard with a double choir and only continuo accompaniment. The vocal lines enter one at a time, building up a richly imitative opening section. The remainder of the piece continues with imitative textures, with suspensions a strong feature of Lotti’s colourful and evolving harmonic language.

This flexible arrangement for flutes is ideally suited to an ensemble of predominantly low flutes, but C flutes may be used on the upper parts to provide brightness of tone.

Antonio Lotti (1667 – 1740) was born in Venice and started singing at St Mark’s in 1687. He later became the organist at St Mark’s and composed operas, masses and madrigals. He spent two years on leave in Dresden, where he wrote a further three operas. He returned to his work at St Mark’s, eventually becoming maestro di cappella in 1736. He had a number of students, including Benedetto Marcello, Giuseppi Saratelli and Jan Dismas Zelenka. He also taught at one of the four Ospedali in Venice (the Pietà, which Vivaldi taught at, was another of the four). Lotti’s music was influential amongst his contemporaries, and there are surviving manuscripts of his music which were written out by Handel, and Lotti’s music is also believed to have been included in Bach’s library.