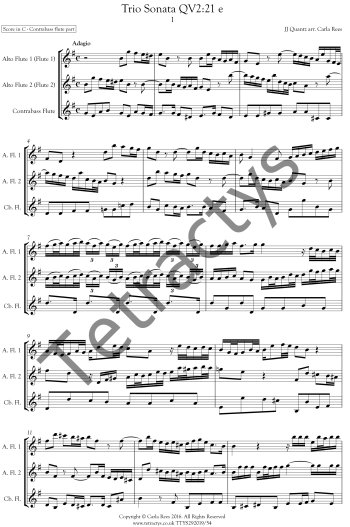 
Quantz was a prolific composer of flute music in the baroque era. Flute teacher and court composer to Frederick the Great, he lived and worked in Potsdam from 1741.

Quantz’s musical training began in 1708, and included learning several string instruments, as well as the oboe and trumpet. His first professional work, ten years later, was as an oboe player in the Polish chapel of Augustus II, King of Poland and Elector of Saxony. A year later, in 1719, he began learning the flute as a way of advancing his career. He also studied composition, and was influenced by Vivaldi, Pisendel, Hasse and Scarlatti, among others. He travelled a lot in the 1720s, including spending time in Warsaw, Paris and Rome. In 1728 he became a member of the Dresden Court chapel, gaining recognition as one of Dresden’s leading performers. In May that year, he travelled to Berlin with the court and impressed Prince Frederick, who employed him for flute lessons twice a year. When Frederick became king in 1740, he was able to make a generous offer to Quantz in order to persuade him to move to take up a permanent place in his court. His famous treatise on flute playing was written in 1752 and first published the following year.

Since Quantz’s pieces were written for Frederick the Great, only very few of them were published during his lifetime, so the exact dates are unknown. The majority of the trio sonatas are thought to have been written while he lived in Dresden. They are usually written in 4 movement form following the Italian style, but evidence of French influences can also be found in the dance movements. Counterpoint is a common feature of his works, and this piece is no exception.

This trio sonata has four movements; Adagio, Allegro, Grazioso and Vivace. This arrangement is flexible and may be played on any combination of two flutes or alto flutes with bass or contrabass. This arrangement was first performed by members of rarescale Flute Academy on 11 April 2016 at All Saints Church, Kingston.