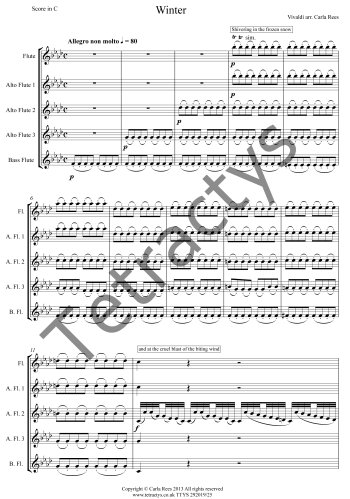 Vivaldi - Winter from the Four Seasons op 8 no 4

The Four Seasons, which stand among the most famous pieces from the Baroque era, are a set of four concertos for solo violin, written in 1723. The concertos are programmatic in character, giving clear depictions of mood and character, including bird songs, a babbling brook and a barking dog in Spring, a thunderstorm in Summer, a party followed by sleep and a hunting scene in Autumn and chattering teeth, stamping feet, frozen wind and a roaring fireplace in Winter. Short poems accompany each concerto, written by Vivaldi himself.

This arrangement for flute ensemble maintains the homogenous sound of the string ensemble, while the solo line soars above in a dazzling display of virtuosity.

Winter
Shivering, frozen in the icy snow.
In the strong blasts of stinging winds
Running to and fro, stamping ones feet at every step
Teeth chattering in the bitter cold.

To rest contentedly by the fireside, while those outside are drenched by pouring rain

We walk the icy path slowly and carefully, for fear of falling.
Then turn abruptly, slide and fall to the ground, and, upon rising, hurry across the ice in case it cracks.
We feel the chill north winds, Sirocco and Boreas and all the winds in battle, through the house despite the locked and bolted doors.
This is winter, but it brings joy.