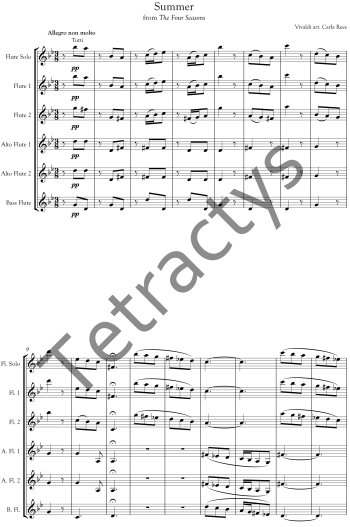 Vivaldi - Summer from the Four Seasons op 8 no 2

The Four Seasons, which stand among the most famous pieces from the Baroque era, are a set of four concertos for solo violin, written in 1723. The concertos are programmatic in character, giving clear depictions of mood and character, including bird songs, a babbling brook and a barking dog in Spring, a thunderstorm in Summer, a party followed by sleep and a hunting scene in Autumn and chattering teeth, stamping feet, frozen wind and a roaring fireplace in Winter. Short poems accompany each concerto, written by Vivaldi himself.

This arrangement for flute ensemble maintains the homogenous sound of the string ensemble, while the solo line soars above in a dazzling display of virtuosity.


[Summer
Under the relentless heat of the sun
Languishes man and flock; the pine tree burns,
We hear the voice of the and at once
the songs of turtle doves and the goldfinch are heard.
A gentle breeze blows, but Boreas
Joins battle suddenly with his neighbour.
And the shepherd weeps from fear of the storm
And what it might bring.

His tired limbs are awakened from their rest
By his fear of the lightning and the heavy thunder
And by the furious swarm of flies and hornets.

Alas, his fears are justified, as the heavens roar
and large hailstones beat down breaking the lofty ears of corn.