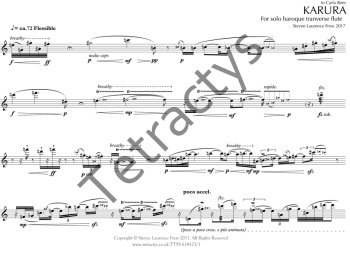 I first imagined the idea to write a work for solo flute when visiting the Sanj?sangen-d? Temple in Kyoto. Amongst the vast collection of artefacts sits the impressive statue of the deity Karura. The original Sanskrit name of this deity is “Garuda”. In ancient India it was believed to be a gigantic bird which ate cobras and carried the Hindu deity Vishnu on its back. Later on Guruda was adopted in Buddhism as one of the eight guardians. The statues at Sanj?sangen-d? represents a fierce bird-headed figure with wings, playing the flute.

Using the baroque transverse flute I have attempted to evoke some of the characteristics of the Shakuhachi (Japanese flute). From the work’s still sonorous opening, the music gathers intensity throughout but sustains the superimpositions of melodic material which relate to the whole piece.

Karura was written for Carla Rees who gave the first performance at Iklectik in London on 14 October 2017.