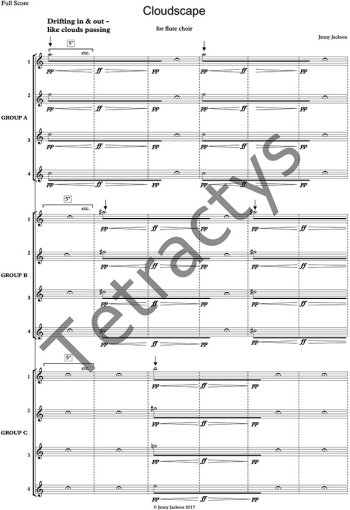 
Cloudscape was commissioned by Sheffield Flute Choir for the Classical Sheffield Weekend. I am fascinated by the sound of the flute choir which can be equally sweet and brash, and is reminiscent of the flute sound on a fairground organ. In composing the piece, I chose to celebrate the sameness rather than trying to find differences between the instruments, and to treat the choir as one big instrument.

To achieve the effect of masking and clearing clouds, the flute choir is divided into three groups with four different parts in each. Each group has its own unique set of pitches which are often combined to create blocks of sustained chords that fade in and out. I wanted to capture the feeling of a drifting and evolving cloudscape.