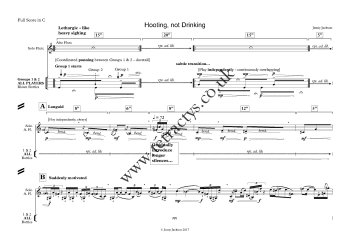 This piece was originally written in 2016 as a response to john White's bottle-blowing piece, Drinking & Hooting Machine (1968) which concerns itself with the gradual evolution of a continuum of sound from high to low. I wanted to write a piece that uses blown bottles in a more 'musical' way, but controlling combinations of high to low sounding bottles to provide a distant, harmonic backdrop for the solo flute. In this revised version, I have expanded the breathy bottle ensemble to include flutes, enabling a more colourful exploration of the sound world, and a heightened spatial experience