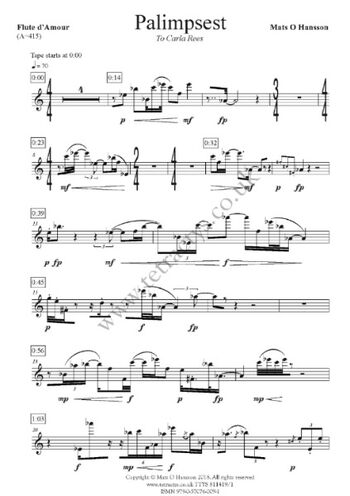 For Baroque Flute D'Amour and electronics


Palimpsest is the name of a sort of manuscript page from which the text has been scraped off so that the page can be used for another document. Ancient Greek and Roman Pergamene manuscripts have been found containing several layers of text. From this I had the idea to work with layers of themes that are revealed during the execution of the piece.

One layer is constructed using only the strong notes of the Flute D’Amour – the D major scale. For the other layer I’ve used the pentatonic scale which is the complement of the D major scale. The piece starts with the weaker layer which then gradually turns into the stronger layer – a kind of long cross-fade.

At the end there is a coda which features the theme that was used as the starting material for composing the two layers.

The work is dedicated to Carla Rees.