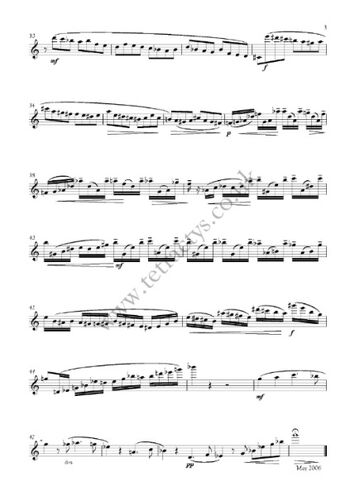 Elegy
When I was 10 years old I had the huge stroke of luck to have Alex Murray as my flute teacher for the next four years. And thanks to him again, over 30 years later, he suggested I got involved with the Oxford Flute Summer School. As a small gesture of thanks I composed Elegy for him, which he played at his concert during the flute course. And nearly 30 years later he is still an excellent and influential friend.

For Ursula
Ursula Benn was my aunt, and the person who arranged for me to meet Alex Murray. A wonderfully kind lady, she was also a renowned teacher of the Alexander Technique and as such somehow managed to help me keep in relatively good physical shape for much of my life, especially after my various skiing accidents! I wrote this piece for her and played it at her memorial service. The slightly 'tinkly' passages in bars 13 to 17 are an attempt at giving an idea of her delightful laugh.

Just for laughs
Last year the Music Conservatoire in Aix-les-Bains, France, asked me to compose and perform a short solo piece for its end of year concert. At the time I was entangled in writing a serious and complicated piece for a difficult combination of instruments that I had been asked to produce. So Just for Laughs was a pleasant and welcome change of mood, a bit of fun for the end of year celebrations.

Go Home Lake
Also last year my family gathered in Canada to lay my wife's parents ashes to rest. We took the opportunity to spend a week in an isolated cabin on one of Ontario's beautiful lakes, Go Home Lake. One morning I was up not long after sunrise and sat in wonder by the water's edge as the lake slowly came alive; the thin layer of mist gradually dissipating, bird calls, a breeze. I was very lucky to be a solo witness to such a magical couple of hours. This piece is my attempt to capture all that in just a few short minutes of music. In case it's unfamiliar to you, a loon is a bird you get in North American lakes. It has a very distinctive call which I hope I have 'reproduced' accurately enough.