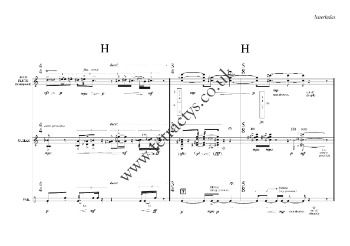 For alto flute, guitar and percussion (2012)


Our lives are filled with words and texts. They can be informative, amusing, irksome, offensive, who knows? I became curious about what might happen if the letters that make up texts were removed from their original contexts and treated not as poetry, exegesis or word painting, but as pointers to specific musical material. The choice of texts - and they are always different, chosen by the performers for each version – will determine the musical content in a letterlude. The result is not text setting in a traditional sense, but rather “playing with letters” in an attempt to discover a new musical coherence from patterns and habits of written language that are hidden beneath the process of constructing meaning.

Letterludes was commissioned by Shanna Gutierrez and premiered by Ensemble dal Niente in Evanston, January 31, 2013.