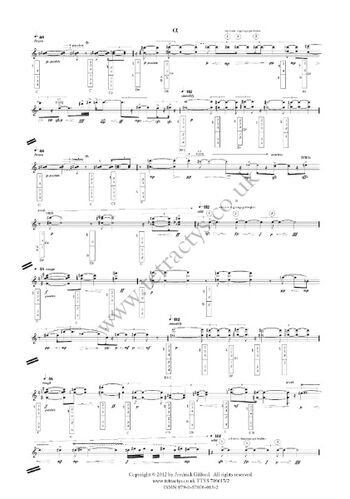 
The “mobiles” are entries in an ongoing series of works, begun in 2003, in which I write a new mobile each year. The two simple rules for the project are: each piece should have a different instrumentation and each piece should manifest a different kind of mobility (i.e. indeterminacy or “openness”).

mobile 2012, for solo flute, explores the problem of forking paths: that is, the performer must constantly choose between two musical paths forward. She may begin with any musical phrase (there are 16 in total), but this must be followed by one of two possible continuities. This makes the system of choosing breakdown, causing material to be repeated in an unpredictable manner. Musically, the surface explores a wide range of very specific multiple sonorities to effect what is often a true polyphony – a very understated kind of virtuosity, but fiendishly difficult.