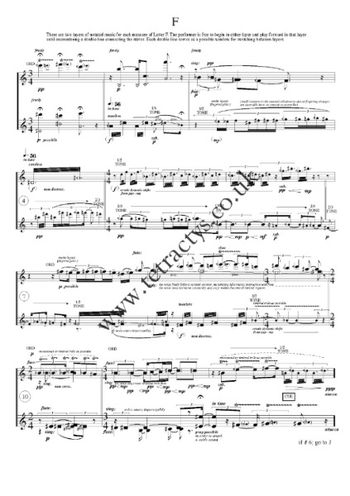 For Open-Hole Bass Flute and Electronics (2016)


The Balinese word associated with shadow puppets, wayang, is difficult to translate, but hints at the idea that all art is a shadow of life. MOBILE 2016 is built around two concepts: the dramatic structure of ancient shadow plays, and sounds from Dante Alighieri’s Inferno. Shadow plays often create situations revolving around a few words and the misunderstandings or changes in meaning that occur as different characters utter them. Here, the words are taken from Dante by sampling the Inferno for cantos containing the word ombra – shadow (the cantos are provided in full in the score). The bass flute and electronics are both actors and shadows in this play: their “words” at once generate the surface and stand behind all the sounds in this mobile. Commissioned by the Ear Taxi Festival (Chicago, 2016) for Shanna Gutierrez, Shadow Play was written for the instrument by Eva Kingma.