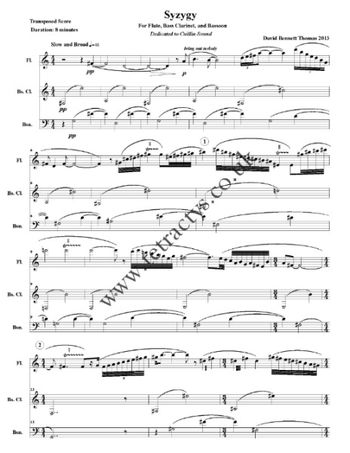 
Syzygy is defined as "the nearly straight-line configuration of three celestial bodies (as the sun, moon, and earth during a solar or lunar eclipse) in a gravitational system." I love the image of three massive celestial bodies slowly aligning in space. I thought that the opening of the piece captured something of that mood, as slow moving patterns emerge underneath, with broad melodies above. The title seemed appropriate to me because this is a piece for three instruments, which represent the three bodies, and also because of the fact that "Syzygy" is such a cool word. It has been a pleasure composing for Cuillin Sound......a composer's dream! I hope you enjoy the music.
DBT October 8, 2014