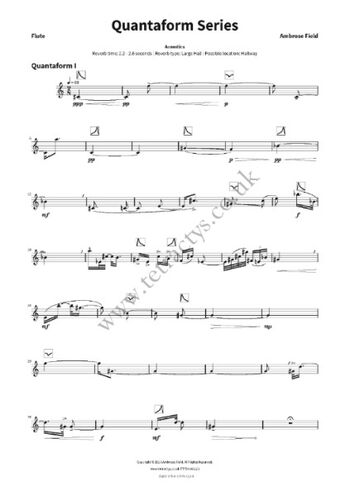 
Quantaform Series is a cycle of 20 short pieces for Flute, designed as a partnership between performer and architectural acoustics. Each piece is written with the effects of a particular type of space in mind, where the choice of acoustic has influenced patterns of melodic line and rhythm.

The title comes from the approach Field has taken to form. There is no repetition or redundant material: when each movement has made a concise statement in sound, it stops.

Quantaform Series was originally composed in 2013. Since then, it has been recorded commercially by Jos Zwaanenburg (Sargasso: SCD 28071) and was the subject of a film supported by public funding from the UK Arts Council Heritage Lottery Fund. Here, James Wilson performs each movement in unusual locations, from Turkish Baths to rooftops and football stadia. The piece was revised in 2019.

Quantaform Series is technically demanding, requiring nuanced control and timing from the performer. Inspired by analog synthesiser techniques, a series of micro-articulations are notated, sculpting the attack and decay trajectories of sound. Quantaform Series has been set as a final recital piece for graduate flautists at a number of European Conservatories. Alternative and creative responses to the realisation of this work are highly encouraged.