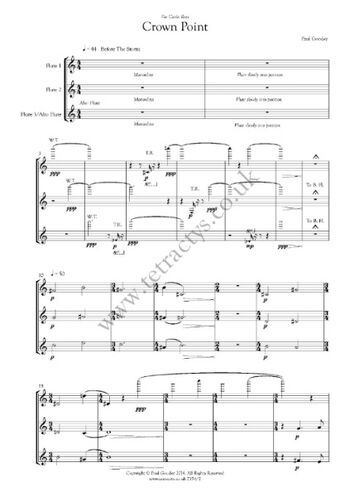 
This piece for flute trio was written in 2014 and is dedicated to Carla Rees.

When I began writing my Flute Trio, I visited Crown Point - a sculpture on the hills in Lancashire, England. The art work, designed by Mike Tonkin and Anna Liu was part of a project to add works of art across the countryside of East Lancashire. The sculpture is constructed from metal pipes which resonate in the wind which inspired me to explore sounds of various winds and create musical responses to other types of weather e.g. snow and ice.

The Trio evolved into a highly virtuosic work for musicians performing using piccolos, C flute, Alto Flute and Bass Flutes. The movements are:

Before The Storm
At Crown Point: The Singing Ringing Tree
Bayamon
A Brutal Wind in Cuba
Dendrites
A class of large snowflake with six arms and a fern-like appearance
Chubasco
A violent squall with thunder and lightning in Mexico
Graupel
Snow pellets or soft hail
Etesian
A refreshing summer wind over the Mediterranean and Aegean Sea