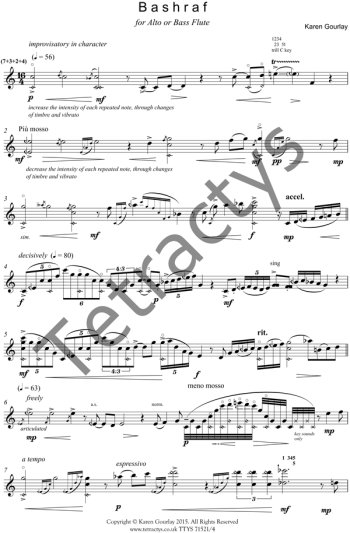 The initial inspiration for Bashraf came from Arabic music and an interest in music containing quarter-tones. It is particularly influenced by the Arabic sequences of notes called maqam (plural Maqamat) many of which use altered tuning. Derived from the Persian work peshrev, meaning ‘that which precedes’ , the title refers to a piece of music that is often performed as an opening composition as part of a suite. Similarly, this Bashraf can be performed as the first piece in a recital or programmed amongst other works.

Bashraf contains four sections (Khana, plural Khanat) each of which is followed by a recurring passage (taslum) as in the traditional form. Improvisatory in nature, each Khana has its own tempo and varies in character exploring related maqamat. In performance the flute player is encouraged to explore these features; metronome marks are optional. The returning taslum balances this freedom with consistency of tempo, using only one maqam throughout. Developing in complexity at each recurrence, it is as if the refrain is trying to break free of the repeating cycle, never quite suceeding, until recalling a fragment of the second khana on the last bear of the penultimate bar.