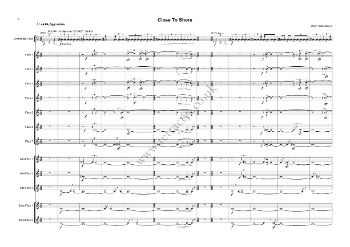 
For many years, I have been obsessed with all species of fish, to the extent that I would probably class myself as an amateur ichthyologist (someone who studies fish). I was particularly interested in large fish and sharks when growing up and although I have never got round to swimming with sharks, it is on the list of things to do.

I have a strong memory of snorkelling, while on a family holiday in Menorca, in 1993, and being transfixed by an Ocean Sunfish, which was circling the small bay in which I was swimming. Although it was a small member of this unusual-looking species, it was still some 6 feet long (and tall), with a number of smaller fish swimming alongside it and probably weighed many times the small frame of my 15-year-old self.

I imagine the contrabass flute in this work to act as a sort of instigator of musical material, dragging the 12 ensemble players along with it, as it tries to find its way into the open.

Close to Shore takes its title from a book by Michael Capuzzo about the shark attacks that ultimately inspired Peter Benchley to write Jaws, in New Jersey in the summer of 1916