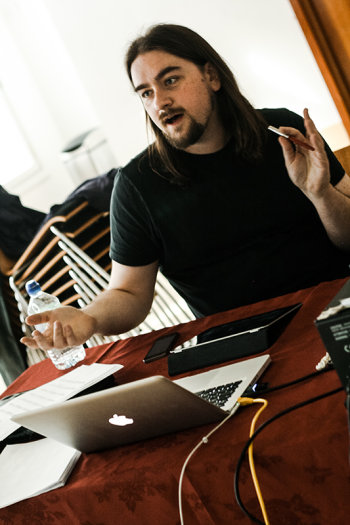 Matthew Whiteside is a composer and CEO & Artistic Director of The Night With… Based in Glasgow he is one of the List’s Hot 100 for 2019 and was named ‘One to Watch’ in the Herald’s Culture Awards 2017. In 2018 he won the Light Moves Innovative Use of Sound Award for his work Entangled with Marisa Zanotti.

Other recent work has included a short opera Little Black Lies commissioned by Scottish Opera Connect, with libretto by Helene Grøn, Entangled commissioned by the Institute of Physics for the 2018 NI Science Festival and working with filmmaker/chorographer Marisa Zanotti developing a new piece with Magnetic North for ensemble, film and VR.

He has received international performances by ensembles such as the RTÉ NSO, Red Note Ensemble, the Aurea Quartet and Diagenesis Duo at venues such as Dublin’s National Concert Hall, New York University, Glasgow City Halls, Salem Artworks in New York and the Belfast International Festival at Queen’s.

He composed the music for The End of the Game, Michael Palin’s Quest for Artemisia, broadcast on BBC 4 during Christmas 2015, and has scored two feature films (Anna Unbound and The Loudest Sound).

In 2020 he is writing a new piece for violin and electronics for Pauline Kim Harris and Ensemble Offspring are giving the Australian première of Rama, as well as planning the 2020 season of The Night With…

Matthew’s second album Entangled was released in 2019 featuring three string quartets which is available digitally on all digital platforms as well as physically from Bandcamp and Amazon. More info on his website.

Press Quotes
‘Matthew Whiteside is clearly a talented and creative person who is already doing well and no doubt has a bright future.’
Dominy Clements, Musicweb International

‘A great way to get to know the electro-acoustic music world of Matthew Whiteside’ – Ken Walton, The Scotsman ****.