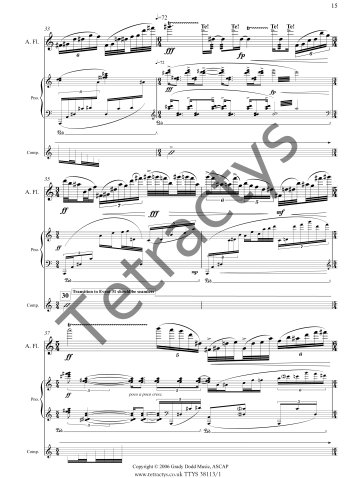 For now we see through a glass, darkly; but then face to face: now I know in part; but
then shall I know even as also I am known.
I Corinthians 13:12


Theological reflection in music has been an interest to composers such as Bach, Mendelssohn, and Messiaen, as well as others. I also have been influenced by my theological interests which is brought out quite deliberately in …glass darkly…
…glass darkly… is the first work in which I have utilized computer software from IRCAM (Institut de Recherche et Coordination Acoustique/Musique.) Though the work is influenced and borne out of electronic music techniques it is not a work that is cold and lifeless. It is highly structured in terms of form and harmonic content yet contains moments of quiet reflection that are contrasted with episodes of dramatic peaks. In terms of overt theological exploration the harmonic material is the most prominent though other elements of the work bear this out. The harmonies are derived from an electronic music technique called Ring Modulation. This is a process whereby two or more audio signals are multiplied and the sum and difference tones are the result of the operation. Oftentimes the result of this operation produces various microtones, i.e. tones that fall somewhere between the typical half steps of Western tuning. In working with this type of material I knew that the piano could not play the microtones without substantial retuning which was not an option I wanted to take. I then thought of the passage from I Corinthians. If one
were to explore in musical terms what this passage means how would that affect the outcome? How does one see into eternity with mortal eyes? What do we see when we look through a glass darkly? As I considered my material in light of this passage I thought it best to fit the material to the particular instruments. To do this I needed to “round up” the various microtones so they would fit the given instrument. So for example say one tone had a frequency of 427.65 Hz (the half-way point between G# - 415.30 Hz and A – 440 Hz.) I could keep the pitch for the flute, as it can readily play quartertones, but I would then round up the pitch to 440 Hz for the piano. I then added an electronic portion to the music to further realize the other microtones that the flute couldn’t play. The result of all this is that there are three layers that are incomplete reflections of the each other. In a theological sense we are seeing three separate persons who are of the same essence or as the Second Helvetic Confession of 1566 states “…there are not three Gods, but three persons, consubstantial, coeternal, and coequal…they are joined together that they are one God; and the divine essence is common to the Father, the Son, and the Holy Spirit.”

…glass darkly… was premiered by rarescale.