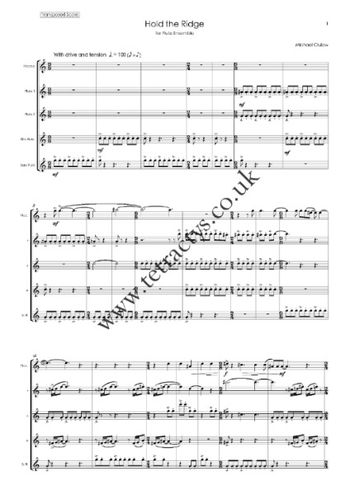 Hold the Ridge was originally inspired by the journal extracts of Ellis Silas, a soldier of the Gallipoli campaign. A painter and illustrator, Silas sailed from London to Australia in 1907 and settled in Perth, WA. He enlisted in 1914 at the age of 30 and landed in Gallipoli on the evening of 25 April 1915. Although his extracts on the whole were the catalyst for this piece, in particular parts of his entry from May 2nd where he noted the taking of the ridge, were of particular note:

'...then over all the bloody fiends of Hell let loose. Every rifle, every gun, opened up simultaneously; the ridge became a blaze of fire, a murderous enfilade from the enemy's right swept that hillside with a rain of lead men withered away under it; the wounded, screaming in their agonies, rolled down the sheer slope, filling the gully below with a mass of writhing human flesh, soaking the gully in a torrent of blood.'

'We hung on with our bare hands to get a grip of that terrible soil, which crumbled away at the touch; scrambling, rolling, sliding in our efforts to get a hold...'

'...in every crevice little stabs of fire, the enemy had their target in front of them, they couldn't miss, they could roll their bombs down in dozens, each would get its mark - at last we got them out of the trenches, the ridge was taken - could we hold it?'

Through these writings we can start to imagine the hardship of soldiers during their actions at Gallipoli. The aim of this piece is to invoke the unending tension of a moment such as the one on May 2nd when the 4th Allied Brigade charged the enemy and to perhaps gain perspective on how those actions effected the soldiers of the time.