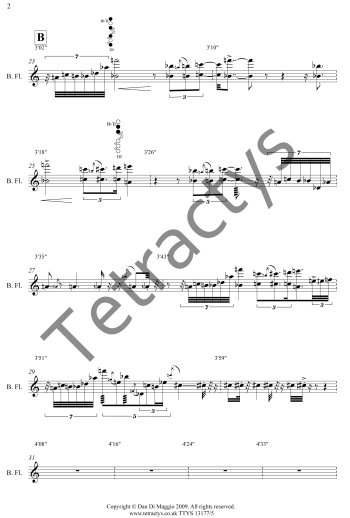 
I’m going to record a concept album called Monsters, someday. Same Old Monsters will be the main composition, along with Bardhezi, for unaccompanied voice, with which it forms a diptych. The title suggests that the characteristics of human violence, oppression and malice are the same over the centuries. The idea of the piece is an activity that requires attention, delicacy and commitment (the bass flute part, with its rhythmic intricacies, quartertones and multiphonics), opposed to the obtuse brutality of the Same Old Monsters. Our antihero tries to resist and to fight back, but at the end gives up, and his voice becomes nothing but an inarticulate babble. The final version of the score was done with technical supervision by Carla Rees.

Same Old Monsters was written in 2009 for Kingma System Bass Flute and electronics. The piece is dedicated to Carla Rees, for whom it was written.