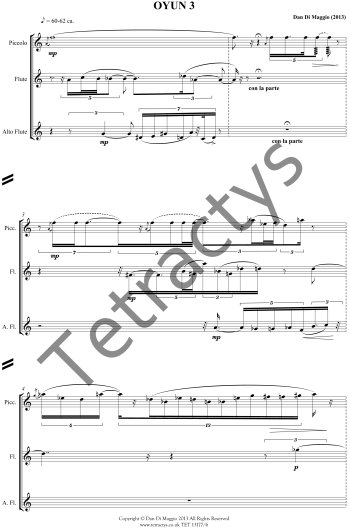 
In the Autumn of 2012 I wrote some rhythmically tricky and interesting patterns, suitable for different instruments. The idea was to have some modular structures, some “bricks”, so to speak, to play with and build various sound agglomerations, using different instruments with the most various ranges, different combos and different tempi. I used the procedure with this material four times so far.

Oyun 3 was one of these cases, and the commasion came when Matjaz Debeljak asked me to write a piece for his 2nd European Piccolo Festival, to be held in Slovenia in August 2013.

The piece is undoubtedly demanding, with its challenging overlapping of different and complex rhythms. The premiere was beautifully performed in Jezersko, Slovenia by an amazing trio: Taja Repe on piccolo, Kia Bennett on flute and Carla Rees on alto flute.