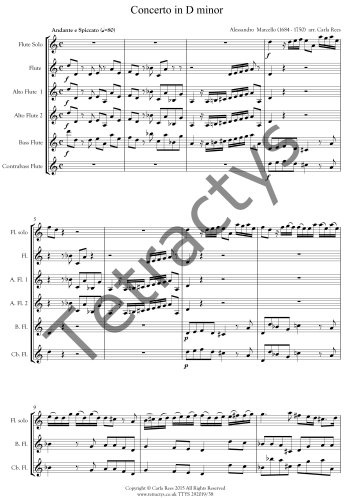 
This concerto was originally written for solo oboe and also appears in a keyboard transcription by Bach, which helped to secure its longevity (although it is thought that Bach erroneously thought the concerto was written by Vivaldi, his most admired Italian composer). An Italian nobleman, Alessandro Marcello was the brother of the perhaps better known composer Benedetto Marcello. Alessandro had a busy life which incorporated professional endeavours in poetry, philosophy and mathematics as well as music. He lived in Venice, where he worked as a curator, taking responsibility for paintings in family collections and in parish churches, as well as developing the musical instrument collection of the Accademia degli Animosi which is now housed in the National Museum of Musical Instruments in Rome.

His compositions were mostly published under the pseudonym Eterio Stinfalico, which was the name he was known by in noble circles. Although he did not write many works, he was recognised as having an excellent talent for composition, and the slow movement of his oboe concerto is perhaps one of the best known works of the baroque era.