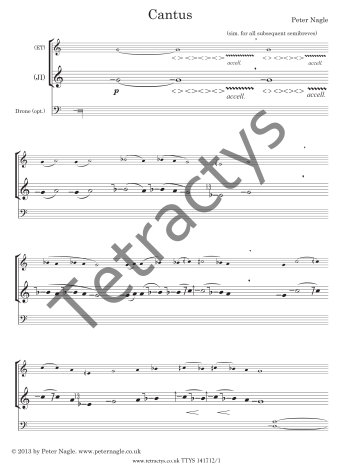 
Cantus is a free melody based on a scale comprising intervals derived from the first, third, seventh, eleventh and thirteenth tones of the harmonic series. It may be performed as a solo or with accompanying drones.

“Cantus” has a number of meanings in music terminology: the primary meaning I have in mind here is the simplest one, of a melody. There are a number of variants, but the one that comes closest to what I have in mind in this piece is Cantus simplex planus, which Grove defines as “a simple melody using notes of indefinite value, as in Gregorian chant.” There is something chant- or prayer-like about this melody, though
as I am a confimed atheist, I can’t say to whom the prayer might be directed. PN


Cantus was composed for Carla Rees for the tenth anniversary of rarescale, and first performed at the Royal College of Music on 27 September 2013