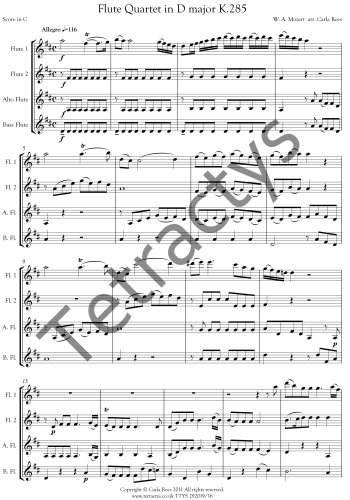 
In 1777, Mozart was famously commissioned to write three concertos and at least three quartets for flute by Ferdinand de Jean, a flute playing philanthropist who Mozart met in Mannheim. The pieces were to be played by Johann Baptist Wendling, who was the celebrated flute player in the Mannheim orchestra. Although Mozart didn’t complete the commission (the third concerto was missing) and is said to have written of his distaste of the flute (this comment in a letter is perhaps little more than a venting of frustration at having to focus his attentions to one instrument for a relatively long stretch of time), these pieces form an important, and highly respected, part of the flute’s Classical repertoire.

The D major quartet has the feel of a concerto, and is in three movements, beginning with a sonata form first movement. The lyrical and expressive slow movement allows the solo flute to float over pizzicato string accompaniment, and the final rondo sparkles with energy, featuring dialogues between the parts and a particularly active role for the viola player (heard on the alto flute in this arrangement). The quartet was completed on Christmas Day, 1777, when Mozart was 21 years old.

In this version the string trio is replaced by different members of the flute family, whose varying timbres combine and contrast to create a strong and effective chamber ensemble.