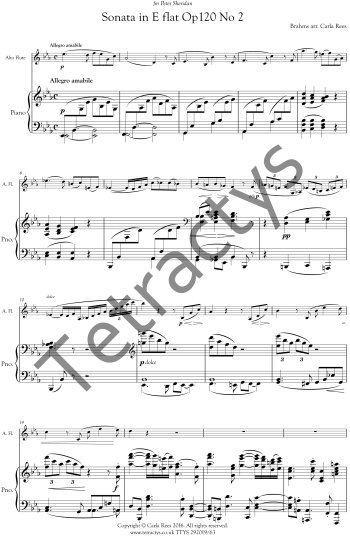 
This three movement sonata was written in 1894 and first published the following year. Brahms had announced his retirement from composition in 1890, but he delayed this in order to write four final works (a quintet, a trio and two sonatas), inspired by the German clarinet player Richard Mühlfeld. This is the second of those two sonatas, originally written for clarinet and also known in a version for viola, which was made at the request of the publisher, Simrock. Since there exists some debate regarding how much Brahms himself was involved in the preparation of this version, this arrangement for alto flute and piano, commissioned by Peter Sheridan in 2016, is based on the version for clarinet.

The opening Allegro amabile is moderately paced, with flowing lyrical lines and a sense of warmth; written in Sonata Form, Brahms provides a rich development and a subtle approach to the form. The second movement is a scherzo, rather than a traditional slow movement, in the key of E flat minor, and this is followed by a Theme and Variations for the last movement. Both of these movements are the last examples of these forms he ever wrote