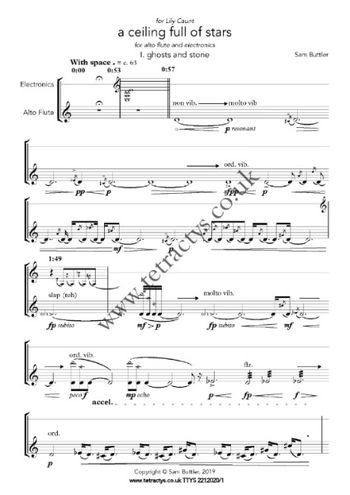 This piece is inspired by and written for the Monteath Mausoleum near Ancrum in the Scottish Borders. This building has an incredible acoustic, as well as a ceiling featuring 48 green glass stars. I wanted to capture the grandeur of the space, as well as give the music a ghostly element. The piece falls into three sections: ghosts and stone, moonrise, and starlight and spirits. The first imagines the mausoleum empty apart from the dead, with just a small amount of light shining through the ceiling. The second depicts the moon rising over the stars, and filling with a pale light. In the third section, the stars in the ceiling now shine, and the spirits within the mausoleum dance, before resting again at the end of the piece.

The electronics for this piece were recorded by Lily Caunt. They consist of sounds from the piece, recorded within the Monteath Mausoleum, as well as field recordings from the surrounding area.

This piece is dedicated to Lily, to whom I want to thank for all her work throughout the project. Without her, a ceiling full of stars would not exist.