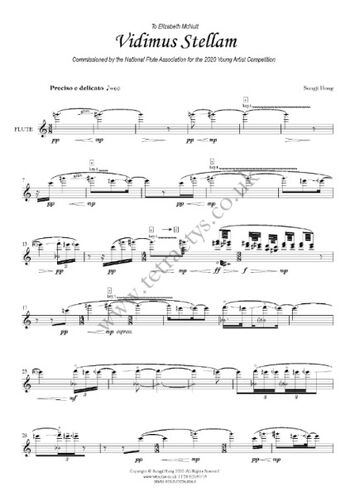 The Latin title translates to "We have seen His star" and pertains to the Biblical account of the star hovering above the birthplace of Christ. I wanted to create a sound that imitates the effect of a rapidly flickering star in the night sky; the way the starlight intensifies and changes its brightness in complex patterns. I explored this natural phenomenon with everchanging musical gestures of soft microtonal glissandi and pitch bends, and also in dynamic sections with jet whistles, harmonic sweeps, and harmonic climbings.

Vidimus Stellam is available from Tetractys Publishing in the UK. It is dedicated to Elizabeth McNutt, experimental flutist and friend, who has been an inspiration for the piece.